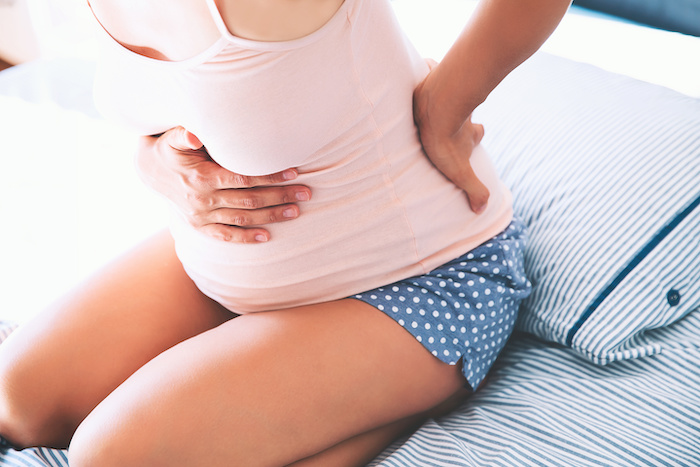 Pregnancy can bring on a wide range of symptoms from cravings and “the glow” to morning sickness and of course, weight gain. While most are merely uncomfortable, others may indicate a potential complication. It’s important to be aware of what pregnancy symptoms you should call your doctor about right away:

While is natural to feel a little more tired than normal during pregnancy, extreme fatigue and dizziness may be a sign of anemia. Anemia is the result of a low count of red blood cells, meaning that not enough oxygen is being transported throughout the body.

In addition to extreme fatigue and shortness of breath, shortness of breath and breathing complications can be seen. This is another indication that oxygen transport is inefficient. Normally, this can be treated conservatively by consuming more iron-rich foods or iron supplements.

Nausea and vomiting are common symptoms, especially in the early stages of pregnancy (thanks, hormones). Commonly referred to as morning sickness, these symptoms can actually strike at any time of day. However, there is a fine line between normal and extreme. If vomiting becomes constant, it may be a sign that you have hyperemesis gravidarum–a condition that has the potential to cause severe dehydration if left untreated. If you are unable to keep fluids down for more than 8 hours, you should call your doctor.

Research shows that an estimated 20-30% of women experience some degree of bleeding in early pregnancy. In some cases, particularly within the first two weeks following conception, this may be implantation bleeding which occurs as the fertilized egg implants itself in the lining of the uterus. Other potential causes in early pregnancy could be an infection, such as UTI, or irritation caused by intercourse.

While pain with kicking is normal, especially in the later stages of pregnancy, severe cramping or stomach pain should be noted. If the cramping does not subside, this may indicate a potential problem with the placenta or a disruption in the natural progression of the pregnancy, including but not limited to miscarriage.

5. A spike in the mother’s blood pressure

A slight increase in blood pressure during pregnancy can be normal due to the extra stress on the body. However, if blood pressure starts to spike, in association with other symptoms such as swelling and blurred vision, a condition known as preeclampsia may be present.

If this does occur, early delivery may be necessary and the baby may need additional time under medical supervision to continue natural development before being released.

Sometime between 13 and 25 weeks, you will feel your baby begin to move. In many cases, first-time moms may not feel these movements as early as women who have been pregnant before, but it’s important to remember that each woman and each pregnancy is different. If you are more than 20 weeks pregnant and have not felt movement, talk to your doctor.

Once you feel your baby move, you should contact your doctor if you notice a decrease in fetal movement (less than 10 movements in a one hour period).

You may think a mild fever is no big deal, but if you are pregnant and have a fever over 101°F that does not respond to Tylenol it’s important that you don’t ignore it.

Burning or pain when urinating, or changes in the frequency of urination, may be a sign of a urinary tract infection. Around 5% of women can expect to develop at least one UTI during pregnancy and of those, 1 in 3 are likely to experience a recurrence. Generally, UTIs are treated with an antibiotic, but in cases where infection has reached the kidneys, IV antibiotics may be recommended.

Left untreated, UTIs can lead to kidney infection, as well as an increased risk of fetal growth restriction, preeclampsia and preterm birth.

9. Vaginal fluid with color or odor

Discharge is not uncommon during pregnancy, however, it should be clear or white with no smell.

If you experience labor symptoms, you should call your doctor immediately. These include five contractions in 1 hour, if less than 36 weeks; contractions every five minutes or less for 1 hour; and/or rupture of membranes, commonly known as your “water breaking.”

While no one ever wants to incur a complication during pregnancy, preparing for the “what-ifs” and knowing what to look out for is the best way to prevent harm to the baby or the mother. Careful observation and open communication with your physician is necessary in order to promote the best interests for both throughout the duration of a pregnancy.

If you experience any of the above symptoms, call Raleigh OB/GYN at (919) 876-8225. One of our physicians is on call 24 hours a day to handle emergencies and deliveries.